A cooling fan is an essential component of a computer. It helps the central processing unit cool down and help it operate properly. Removing the CPU cooler is ideal during cleaning, depreciation inspection, and once in a while to replace the thermal paste.

So, knowing how to remove the CPU cooler is a must-know thing for every PC owner. And the good news is, it has rather a straightforward process, not a complicated one.

To remove the CPU cooler, you have to turn off the computer, open up the case, and unlock or unscrew the cooler’s legs. Then you can disconnect it from the motherboard. Exercise precaution when unclipping the cooler from the processor. And that’s all!

Removing a CPU fan may look straightforward to experienced technicians. But it can be a challenging task for DIYers without experience and skills. Follow along, as I share a comprehensive CPU cooler removal process.

How to Remove CPU Cooler (Step-By-Step)

Removing a CPU cooler from a computer can be a daunting and intimidating experience. The CPU fan is vulnerable to becoming fused or stuck to the heat sink. Ultimate care is crucial to avoid damaging the processor and other internal components.

If you don’t have your CPU fan cleaned up or continue to use a PC with a damaged fan, it will overheat the CPU and cause a shut down. People who often get their PC shut, and monitor into power save mode, find this to be the reason.

Step 1: Switch off the Computer

Turn off the computer and disconnect it from the socket before starting to remove the Intel CPU cooler. It will help you avoid getting shocked and reduces the possibility of burning vital components.

Some computer brands have a CPU with a duct or ventilation system. Remove the duct by pressing the clips and pulling them away to make the heat sink and processor visible.

Step 5: Unclip from the Processor

Examine the cooler and remove all the tiny pins holding it to the processor. Unscrew the screws securing the cooler, and remove it. Do not use force since it will damage the processor and cooler in the long run. These steps are variable depending on the computer type. Removing an Intel CPU fan is different from others.

How To Remove A Intel CPU Cooler

Intel CPU cooler has four unique pins that secure it with the processor. I recommend pressing each pin and turning it anti-clockwise to remove it. But start by unplugging the connector from the motherboard.

Insert a screwdriver in the space to press the pins and remove the cooler fast. The technique is ideal for those individuals finding it hard to press pins with their hands. Recheck the cooler to ensure all the pins have been removed to avoid pulling by force.

Clean the old thermal paste between the cooler and processor. Reapply a new paste and reattach the Intel CPU cooler. The thermal paste helps dissipate the heat and enables the cooler to function well. It is the best trick for replacing CPU cooler without removing motherboard.

How to remove an AMD CPU cooler 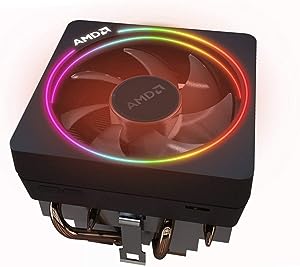 Removing an AMD CPU cooler is simpler compared to an intel cooler. All you will need is the right size of star screwdriver to complete the process. Simply unscrew the 4 legs from the top of the cooler, disconnect the power connector to the motherboard, and lift the cooler off the board. This is applicable for Wraith spire, Wraith stealth, and Threadripper CPUs.

However, if you happen to be using a cooler that has an external docking mechanism, the process would be a bit different. You’ll have to detach the cooler using the clips along the sides of it and later unscrew the dock if you need to. If it’s a wraith prism, you have to unclip and unlatch the clip on the side. Have a look at this guide fro demo:

How to Remove the Cooler Master CPU Fan?

The CPU fans come in different forms and have unique methods of removing them. Cooler Master is no different, and they have a wide range of customers. So, it’s necessary to learn how to remove the cooler master CPU fan since it has heavy cooling units.

What Happens If You Remove The CPU Cooler?

The golden rule is to clean up the CPU cooler and processor surfaces before reattaching them again with a new thermal paste. Ensure there are no bubbles in the paste since they will make your computer slow.

When Should I Remove The CPU Cooler?

Most CPU fans are vulnerable to dust due to regular usage. Excess dust accumulation will inhibit the heat sink from dissipating the heat. Removing and cleaning the CPU cooler is essential to make the processor work efficiently and effectively without heating up.

CPU overheating and constant computer restarts are signs of bad coolers. I recommend replacing them with brand new counterparts. Exposing the machine to dust is the primary reason for the cooler to be stuck, sometimes leading to a dead CPU!

Different jobs pose different sorts of danger to the CPU and the fan. For example, if you’re using a laptop for construction management, your work area will surely cause the cooling vent to developed more dust which you need to clean frequently.

Old thermal paste is greasy and dirty. Take the time to clean up and apply the new paste to the existing cooler well. The process is possible after removing the CPU cooler.

As the CPU cooler in a computer does the most important cooling job, you must keep it in mint condition. It helps dissipate heat generated by the processor and helps it with its optimal performance. Now that you know how to remove a CPU cooler from a computer, it should be an easy job, even for beginners.

I hope this article helped you remove the CPU cooler without damaging other vital components. If you’re doing it after a while, replace the thermal paste by cleaning the previous with isopropyl alcohol and replacing it with a new paste. Be gentle with the clips and bolts, or they may impose a threat to the motherboard or the CPU.