It is a matter of concern when you realize that your GPU usage is very high, yet your computer is in an idle state. This is a commonly reported problem by both AMD and Nvidia graphics card users. It can be rather bothersome, mainly because it makes your fans run at full speed, which can be very loud and disturbing.

So, why is my GPU usage so high? Several factors, such as high-resolution settings, uncapped frame rates, and applications running in the background are the main culprits behind your high GPU usage.

Generally, your computer GPU usage should be below 5% when not in use (idle). However, if you have a higher GPU value even when no applications are running, you need to check a few settings on your computer. In this article, we answer the question, why is my GPU usage so high? We further take you through fixing and lowering GPU usage for better performance. Stay with us.

Why Is My GPU Usage So High?

High GPU usage may overheat your video graphics card, forcing your fans to rotate at maximum speed and stressing your CPU. So, is high GPU usage bad? No. There’s no cause for alarm if you are playing games, rendering videos, mining, or graphical designing, and your GPU usage is high.

You may be wondering, why is my GPU usage so high when idle? There are various causes to this, and you should consider resolving it as soon as possible. Check for third-party applications running in the background; some use up a substantial GPU resource. High-resolution settings could also trigger high GPU usage; always keep your computer resolution settings at the recommended level. Other causes include GPU overlay, uncapped frames, etc.

Is it OK for GPU Usage To Be High?

Unless your computer is not in use, it’s absolutely safe to have higher GPU usage. Ideally, your GPU is designed to run at maximum performance (98 – 100%) when performing GPU-intensive tasks. High GPU usage basically means it’s being correctly used, and it doesn’t affect its lifespan.

However, if your GPU usage remains high even after closing your game or ending your task, then there is an issue with your computer that you need to deal with. Ideally, GPU usage should drop almost immediately after closing running applications.

If you are an advanced computer user, you probably must have come across or asked yourself this question, should my GPU usage be at 100%? NO, not at all. Your Graphics Processing Unit (GPU) should only be maxed (run at 100%) if it performs graphically intensive tasks such as video editing, gaming, graphics design, etc.

How Do I Fix High GPU Usage?

If you have an Nvidia graphics card:

If you have an AMD graphics card:

How to Lower GPU Usage in Windows 10?

How to lower GPU usage in Windows 10 is relatively straightforward. There are several methods to get it done. Here are a few:

Press [Ctrl] + [Alt] + [Del] keys on your keyboard concurrently; this opens the Task Manager. Check whether unused applications are running in the background and end them.

First, ensure your PC meets game system requirements. Then, check if video graphics drivers have been installed. Right-click on [This PC]. Select [Device Manager]. You’ll be presented with a window as below.

High game resolution puts a toll on your GPU. Playing your game at recommended resolution can go a long way in lowering your GPU usage. While high resolution gives you a magnificent gaming experience, you’ll be overworking your graphics card, which is not a good idea. Before playing your game, go to game settings and lower its resolution to match your GPU capability.

If you use a multi-core CPU, it would be best if you adjust your game graphics to four-threads CPU utilization. Go to game settings and check if this option is available. Most PC games perform better on a multi-thread CPU than single-thread. Additionally, you can get the most out of your CPU by overclocking it. Usually, the manufacturer’s default speed is much lower than its capable high speed. Be sure you know how to do this before attempting.

Uninstalling your favorite game and deleting all user data can be a lengthy and painful experience, especially if it involves downloading it again. However, PC games can have corrupt files from virus/malware attacks or bad updates, causing them to act up. That’s why removing everything entirely and starting from scratch is necessary.

Your operating system might be faulty due to a recent update, virus, or malware. To eliminate Windows fault doubt, consider reinstalling it. You can disable Windows updates as well. Services such as Windows tiles and Windows Live are notorious for skyrocketing GPU usage.

Why Is My GPU Usage So High When Playing Games?

Your computer GPU spikes high when playing games since that is how it’s designed to be utilized, particularly in high-resolution games. Even if your GPU runs at 98-100% (maximum performance) and your CPU performance and temperature are optimal (above 60fps and below 85 degrees Celsius), it is totally fine; there’s nothing to worry about. 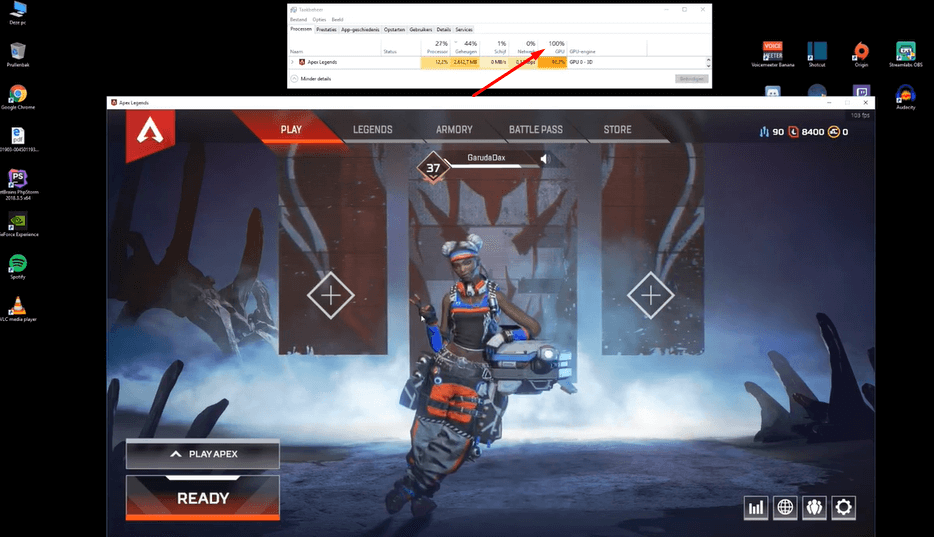 If any of them aren’t working, your GPU is powerful enough to handle the game, the game engine is overtaxing your GPU, or you need to update your video drivers. Generally, video games are designed to maximize your GPU performance.

You may reduce GPU utilization by limiting the number of frames per second (FPS) using Vsync or software. You may also try turning off some GPU-intensive game features such as high resolution, game shadows, Dynamic Super Resolutions (DSR), etc.

GPU Usage is Too High While Playing Fortnite

Is high GPU usage good when playing Fortnite? It’s totally fine. It all hangs around your game resolution. Having your computer GPU at maximum performance (98%) implies it’s running as many frames per second as possible.

GPU utilization when playing Fortnite can be too high if you opt to play the game at high resolution. Although you get a fantastic gaming experience, your GPU will be stretched to its full potential. However, we can’t dismiss the fact that other factors such as uncapped frame rates and background applications might contribute to the high GPU usage.

Fortnite does an exemplary job balancing game load across multi-processor cores, at about 45%. It relies more on the performance of its graphics card (PVE and PVP modes). Therefore, you should just run it on recommended settings to avoid high GPU values.

GPU Usage is Maxed Out While Playing Minecraft

First, activate the V-sync feature or any other feature that could possibly limit or cause a delay between frames. Also, adjust your game settings to maximize GPU energy use. Lastly, block unnecessary external links to keep your GPU running efficiently. External game links lead to intensive GPU usage.

Keep in mind that, unlike many games, Minecraft relies more on your CPU than GPU. This means your CPU power has a significant impact on the performance of your computer while playing Minecraft. Your GPU usage should be at roughly 3-4%.

How to Lower GPU Usage in Games?

Lowering GPU usage in games may involve one or a combination of settings on your computer. The first and simplest is to lower your game resolution. Another option is to tweak your game settings and block unnecessary external traffic/links. In most cases, one of these procedures may work alone, while in some, you may have to combine two or more for better results.

What Should My Gpu Usage Be When Gaming?

How Much GPU Usage Is Normal?

When your computer GPU is idle, expect 0% on usage value. When watching a movie or doing light tasks, expect a few numbers, probably 3 – 15%. When playing low-graphics games, expect values between 30 – 70%, and finally, expect 98 – 100% on maximum GPU usage. High GPU usage is still considered normal, but not when your computer is idle.

Why Is My Gpu Usage So High When Nothing Is Running?

Why Is My GPU Usage So Low?

Several reasons could be behind your very low GPU usage. They include: having a CPU bottleneck, using integrated graphics, playing unoptimized games, or having video driver issues. Fortunately, you can resolve these problems by adjusting a few game settings, reinstalling video drivers, or overclocking or upgrading your CPU.

Ultimately, the ideal usage value for an idle GPU should be below 5%. Suppose your GPU usage has a higher value when nothing is running; you need to check your computer settings. In this article, we have discussed in detail why your GPU usage could be high; and given possible solutions to this issue.

Remember, GPUs are built to be fully utilized. Your GPU usage will clock 98-100% performance for proper handling of graphics-demanding tasks. This is normal and safe for your computer. To lower your GPU usage, we recommend trying out each of the procedures above until you find one that works well with your machine. Good luck!